We were lucky enough to recieve an Australian Government Indigenous Languages and Arts Grant in 2019. This grant enabled us to undertake a very special Cultural Audit with HICSA (Healesville Indigenous Community Services Association). We have gained a deeper understanding of how to honour and respect our Indigenous Families, Community and the Land. We identified that Woi Wurrung Language is on the Critically Endangered List. We designed a project to Identify as many words as we could on site to create interpretive signage in Woi Wurrung. We worked together with Aunty Kim Wandin- a local Wurundjeri Elder, seeking information from Language Specialist – Mandy Nicholson along the way.

We decided to run a festival to celebrate the opening of the signage project. This is the Ngulu Festival. 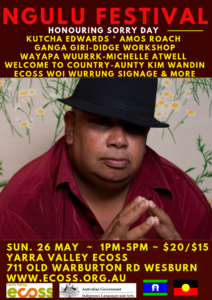