Dr Annie Yoffa was a world traveller, surgeon, psychiatrist, philosopher, published writer and student of Freud. She was also the first woman to hike the Warburton to Walhalla trail, across the Victorian Baw Baw Ranges, unaccompanied in 1929. She dedicated her life to the study of nature and was struck by lightning, in Mount Martha, while conducting research in the field of psychodynamics. She later died a horrific death at the hands of a stranger on her Dandenong Ranges property in 1959.

What struck me initially, about Annie’s story, were her remarkable successes in life but soon afterwards I began questioning why I hadn’t heard of her story before? There’s no mention of her achievements at being the first woman to traverse the Baw Baw Ranges alone and certainly no local creek or park named after this trailblazer.

A bit of history

Originally from Palestine, the Yoffa family had migrated to Australia and settled in Melbourne. They established and ran the Yoffa Hosiery and Knitting Mills in East Brunswick which was nearly destroyed by fire in 1962 (The Argus 1942). Annie and her two brothers all studied medicine. Annie held degrees in Surgery and Medicine from London University and Master of Arts, Cornell University, New York.

Piecing together Annie’s story has been time consuming and at times frustrating. The majority of information relates to her tragic death, her murder in 1959 at the hands of Victor Maxwell Jones who declared that Annie was ‘the mother of Israel’ and that God had told him to kill her. (The Canberra Times 1962)

The biggest clues to Annie’s character are found in her beautifully written novel, The Real Thing; an adventure in the Australian Bush (1929). Here we get a sense of her brilliant mind, her pragmatic attitude and her experiential ambitions – always searching for a connection between nature and our place in the universe. If she were still with us, she would no doubt be laughing at the fuss we are making about her story, as her business was all about getting on with things. Annie was quite unconventional for the society and culture of her time. She challenged the traditional role of women, she pushed boundaries and never detoured from her goals. Something as inconsequential as social norms were not going to stop her from achieving her dreams.

Warburton to Walhalla via the Baw Baw Ranges

During the late 1800s and early 1900s, the Warburton to Walhalla trail was a big thing. It was a popular rite of passage for small groups of (mostly) young men. They would traverse the Australian bush, sleeping in huts along the way, braving the unpredictable elements and conquering Mt Baw Baw. A popular guesthouse, McVeigh’s Hotel was the first port of call, and offered a meal and modest accommodations for walkers about to tackle the track. Annie partook in this favoured ritual and recounts (in her book) the alarm and bemused attitudes of the hotel’s patrons when they found out that she did indeed intend to embark on the journey alone. This was an opinion she was well familiar with.

The call to adventure

Annie was close to her family. It’s no surprise that they did not approve of her embarking on the walk alone. She emphatically declared to her mother that she wanted to do the walk unaccompanied ‘for the fun of the thing’. Her brothers had done so together ‘two years ago’ with ‘a crowd’. Her older brother was of the opinion that ‘If I, a man, would not undertake it because it was not safe, what chance have…’ Her father is more accepting but declares, ‘how can I stop her? She is never satisfied until she learns from experience’. When her father says that no woman has ever attempted the walk on her own Annie replies with ‘well someone has to be the first’. (Yoffa 1929)

Practical, pragmatic and experiential, Annie was open to making mistakes and learning from them. This is evident throughout her journey. The various mishaps and errors in judgement along the way brought on moments of clarity which she applied to further endeavours. She was testing her environment, and herself, and making hypotheses about the experience. In fact, she did this right up until her death, devoting her life to finding the connection between humans, nature and our place in the universe. Finding herself lost and in serious need of water she threw down her knapsack and yelled  ‘what is this, a kind of Parsifal or Tanhauser stunt, an endurance test or a pleasure trip’? (Yoffa 1929)

Annie wasn’t prepared for the transformational impact that the walk would have on her. In her author’s note she adds:

The reader will soon realise that the author, not because but rather in spite of the sensational and personal elements, was impelled to perpetuate in book form the rare if not unique experiences, even to the point of accepting the inevitable and bringing out a private publication. (Yoffa 1932)

Annie’s astonishment of the beauty and scale of this region of Australia is delightfully displayed in her writing. She describes the famous Mushroom Rocks as ‘the perfect imitation of the vegetable by a mineral’. She had visited some of the most famous temples, mosques and cathedrals around the world from St Peters to Notre Dame but she had never seen ‘such surpassing grandeur as the twilight temple of the Australian bush.’ (Yoffa 1929)

After spending countless hours researching and reading about Annie’s life the most notable thing she seems favoured for is her dreadful demise. She was portrayed in the media as a slightly mad hermit who lived in a tent at the time of the murder. This is something we are determined to change. This inspirational woman left a legacy, she was driven to seek the truth, to commune with nature and share her findings with the world. If nothing comes of this at least the real story will have been pieced together and reconstructed, hopefully one day, just like the Warburton to Walhalla trail.

After her death, Annie’s brother told the media that she had planned to give up her self-imposed, solitary life and to publish her findings in her study of psychodynamics. He explained that she had also lived in a shack, in Mount Martha, where she conducted her research. She had bought land in the Dandenong ranges two years previously after being injured when a lightning strike destroyed the shack. ‘She felt she could devote herself completely to her study by living simply in the mountains’. (The Canberra Times 1959)

Annie took photos along the way but my research has failed to uncover any of these. I have, however, spent some time among the State Library of Victoria’s archives looking through her manuscript written in the later years of her life – Upspeech (1935). The late SLV Chief Librarian, Colin McCallum, mentions her in his memoirs as one of their more unusual visitors. He goes on to say that she ‘claimed to be able to describe a person and his character in a series of squiggles and whorls, done with white ink on black paper. These would, in time, be universally understood and accepted, and would eventually replace the laboured use of words and letters.’ (State Library Victoria, 2018, p82).

The real thing – a layered narrative

Annie’s book isn’t just a depiction of her story traipsing across the Baw Baw ranges. It is alive with references to world history, theology, mythology and philosophy. These stories are presented like a stream of consciousness. It seems as if she is using her vast knowledge of history and culture to explain or justify what she is experiencing on the trip. She refers to the world’s great artists, Milton, Goethe, Byron and Rembrandt. She marvels at the genius of Darwin and, after a frightening encounter with a snake, she muses on the fact that ‘Pan and his klan only know, with how many snakes in the ground under me’ (Yoffa, 1929 p.37) Instead of inscribing her name on the door of the Erica Hut (a custom that all hikers including her brothers had followed) she chooses to carve the Ankh symbol, otherwise known as The Key of Life. When asked by one of the hut’s inhabitants what the symbol means, she regales them with stories of the sun-God Ra and ancient Egyptian culture.

Relics of the past

The story of Annie’s intrepid journey paints a picture of an era in Victorian history that is long gone. Long gone too is a lot of the original trail. It now lies blanketed by the waters of the Upper Yarra Reservoir (completed in 1957) and other closed water catchment areas. Also covered by this vast body of water is the site of McVeigh’s hotel, the guest house where Annie stayed on her first night. Interestingly, the original waterwheel that was part of McVeigh’s survived and parts of it were used to rebuild the current version that’s on permanent display at the local Warburton tourism centre The Waterwheel.

In a positive turn of events, there is currently a push to re-open the Warburton to Walhalla trail as close as possible to the original. The new route would go through Noojee, via Toorongo Falls, over Mount Baw Baw and on to Walhalla. Local community groups and organisations in the region have joined forces to lobby for a world-class walking track to lure visitors and hikers to the area promoting ecotourism and celebrating the wonders of our natural environment.

Annie’s journey from Warburton to Walhalla was one of self-discovery through experience. Her life achievements were nothing short of extraordinary. She had planned to publish her findings in her study of psycho-dynamics, but we will never read these discoveries. Instead, a quick web search will produce a collection of newspaper articles surrounding her untimely and shocking death. Reassuringly, the search also uncovers her book which can easily be reserved to read at the State Library of Victoria. It is this story, or rather, this marvelous work of literature that defines how we choose to remember her.

Listen to the theme song and narrated story here:

And the narration of her story here:

Will Tait and Brendan Jones : songmakers, educators and entertainers with a passion for protecting the planet members of the multi-genre festival band 8 Foot Felix and roving enviro-awareness outfit MOOP Patrol. Were to write the theme song of Dr Annie Yoffa.

Natalie Tuck is a Melbourne-based Communications Manager and freelance writer and photographer.

Will Tait is a songsmith, MC and presenter with a passion for inspiring wonder and revealing the hidden potential in situations and gatherings. He is motivated by the idea that our modern global culture is reaching out for a new story about the workings of the world, a story in which we see ourselves as integrally connected to each other and our universe. Through music, theatre, whole-heartedness and humour he aims to create moments of sharing, inspiration and joy that help make this new story tangible and trustworthy.

Brendan Jones is a musician, performer, and engineer with a keen sense of self, community and responsibility for the care of our planet and its manifold inhabitants, and a curiosity for history, stories and adventure.

Chelsea McNab is Executive Officer of Yarra Valley ECOSS, Festival and Event Organiser, Doula, Mother and Social Architect. Chelsea’s passion for the care of the earth, arts and culture drives her many creative pursuits within the Yarra Ranges, with the intention to grow community connection to the natural world and each other. 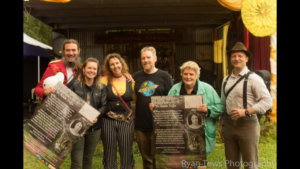 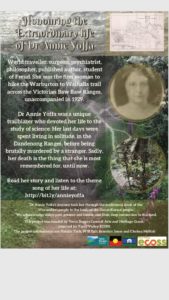 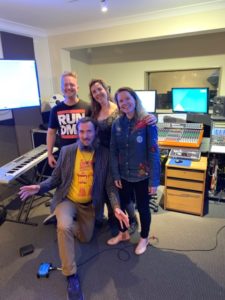